The Poujoulat Group Film unveiled in spring gives us the oportunity to look back on its history , on some significant dates and on the values on which it was built. The adventure started in 1950 in Niort with the company of the same name, Poujoulat. The history of this company deeply influenced the history of the group. 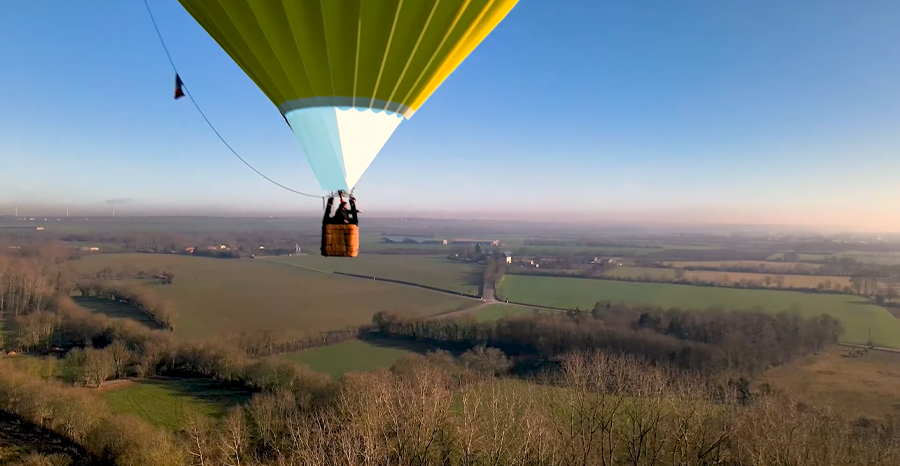 You perhaps wonder where the name « Poujoulat » comes from? Poujoulat is simply the family name of the founders of the company which was created in 1950 in Niort At that time, Poujoulat was a hardware ans sheet metal company. In difficulty, the company was taken over in 1975 by Mr Yves COIRIER, who turned the business around and laid the foundations for a future leading Group in its sector.

During this period, the building industry was evolving, with a preference for lighter components, particulary for the frameworks. Lighter, factory made and ready-to-install metal roof outlet met this need. From 1976, in the context of the oil crisis which saw wood heating return to French homes. Poujoulat installed the insulated chimney flue ans its metal roof outlet in new constructions (a complete solution!), where traditional brick chimneys were still the norm.

More economical, more ergonomic and safer (the metal flue offers better resistance to pressure linked with the rapid rise in temperature of the inserts), this technology is winning over house builders and is becoming increasingly popular. The KITINOX connecting flue, launched in 1985, is one of the first great successes of the brand.

1988 is marked by the entry on the stock exchange of the Poujoulat company, and more precisely on the 2nd market in Nantes. The company which still employs « only » 150 people, gradually established tself in Europe (belgium, Netherlands, England). Poujoulat quickly becomes a Company with Intermediate Size and continues to extend (Poland, Switzerland). To complete and diversify its offer, the group acquired various companies, includind Tôlerie Forézienne, specialized in fine sheet metal work ; urban furniture ans architecture. It has since become TF. 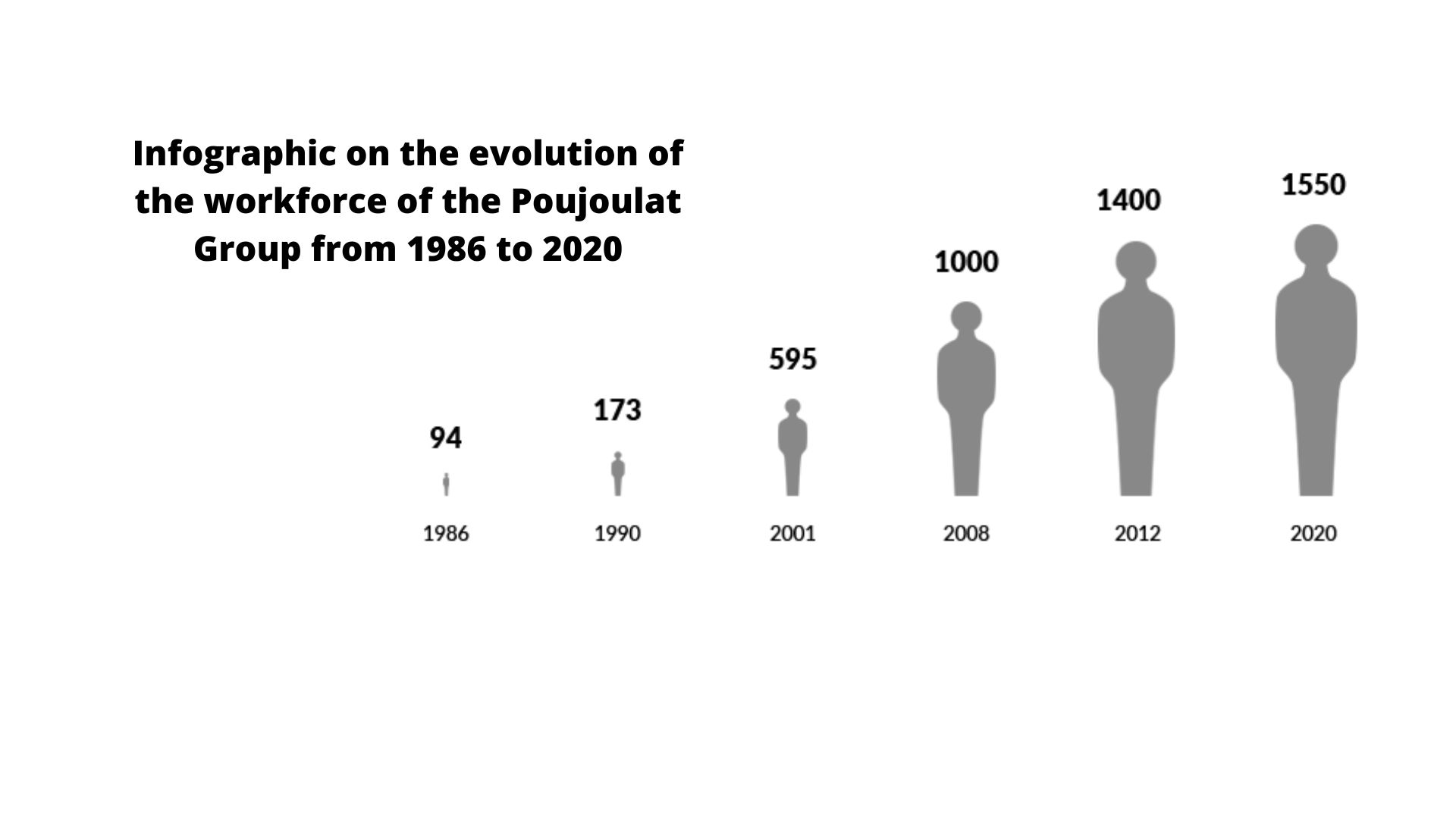 In 1991, a laboratory specialized in the flue system is created to support the activities of the Poujoulat Group. The CERIC laboratory was created. The centre has established itslef as the reference laboratory in Europe in the fields of chimneys and sustainnable energy. It develops, tests and validates all elements of combustion (appliances, fuels, flues).

This new decade is marked by the development of the industial chimney wood fuel and sailing. Indeed, after the domestic chimney, Poujoulat extends its field of action by acquiring BEIRENS, an actor specialized in the metal industrial chimney. Here, the measurements have nothing to do with the fireplace of a single-family home, and the manufacturing and installation methods are also different. In 2002, CHEMINOV is the first « industrialized » induistrial chimney designed for ultra-rapid installation.

In 2003, another chapter opens, a chapter that will durably strengthen and establish the brand with the general public.  Poujoulat becomes Cheminées Poujoulat and associates its image with sailing by sponsoring the skipper Bernard Stamm. It was the beginning of a sporting and human adventure that lasted more than 15 years : Vendée Globe, Barcelona World Race, Transat Jacques Vabre, Tour Voile… The impact on employees, customers and partners is immense, the memories are numerous. In addition to the other communication actions, sailing has enabled Cheminées Poujoulat to reach a new level of notoriety.

The wood energy is the third ground of conquest of Poujoulat Group during this period. The creation of Euro Energies in 2008 is the result of several observations. On the one hand, the strong development of pellet stoves in France- appliances for which Cheminées Poujoulat has also mobilised itself by developing the PGI System in particular – and on the other hand, the insufficiency or even the absence of a quality fuel offer on the market to supply these appliances.

The 2010s further consolidate the already established strategy. The investments made in the Bois Factory (BF36, BF42, and more recently BF70 in Demangevelle) confirm the success of the group's wood energy branch. The development also continues on the international level. Poujoulat settles in Switzerland and in Denmark.

2022, a new film for the Poujoulat Group

Whatever the decade, the Poujoulat Group has always been on the move, has always innovated to anticipate needs and invest in new areas. However, it has remained faithful to his home territory, Niort and the Marais Poitevin, in which it is involved at various levels. The new film of the Poujoulat Group takes you on a tour of its various production sites, including Beirens and BF70, and sheds light on the ambitions and commitments of the company. Have a nice trip.

For several years, you have been a privileged witness of the history of the Poujoulat Group. What is your view on the evolution of the group?

I directed the previous film in 2012. Ten years later, I found in the teams the same desire to provide quality work and products. Everywhere you look, you see the desire to master and develop the company. The great dedication put into research and development is proof of this.

Involvement is strong, at all levels. During a shooting, this is shown when the employees want to participate, when they are a force fo proposal, when they are involved. It was the case in the companies of the Poujoulat Group which welcomed us.

And then, we feel the rise in power of the wood energy activity. The first signs were there in 2012, and this film confirms this development.

The Poujoulat Group has remained faithful to its values ?

Yes, I found the four pillars that underlie the Positive Relations Project without difficulty during the filming. Even though it has developed technologically, even though there have been massive investments, even though it has grown internationally, the group has managed to keep its human dimension.

What scene made the biggest impression on you during the shooting?

The hot air balloon! We had to deal with the weather conditions at the time and the very low clouds. I remember when, all of a sudden, the balloon sank into the cloud ceiling and disappeared like magic... It was very surprising. And then the balloon carries a strong symbolism. It evokes freedom, elevation and the control of air temperature through heating. It is a beautiful wink to the historical trades of the Poujoulat Group.